It was drama yesterday at the Olabisi Onabanjo University, Ago Iwoye, Ogun State when EFCC raided Empire hall in the early hours of the day. According to reports, 34 suspected Internet fraudsters were nabbed by the operatives 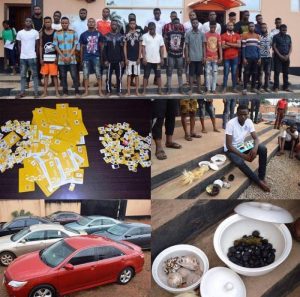 About N18m was reportedly recovered from a student identified as Biggie, he was allegedly supposed to buy a Benz with the money later in the day. Some cars belonging to other students were also towed by the Operatives.

The suspects includes 23 students at Olabisi Onabanjo University, out of which nine were ladies who allegedly claimed to be girlfriends or neighbours of some of the suspects; one was said to be a student of the National Open University of Nigeria, while 12 others are non-students.

It was also gathered that over 300 SIM cards, 18 Apple laptops, 50 mobile phones (21 Iphones) and two bags of charms were allegedly recovered at the point of arrest.

Find The Job That is a Perfect Fit For You

Jobinformant is an online portal that advertises new Job vacancies from companies around Nigeria ranging from SMEs to multinationals.

Employers and Recruiters use our platform to advertise their Job vacancies. We are dedicated to bringing you the latest, hot and current jobs in Nigeria.

Our job services are FREE!